Nickolas Wildstar Seeking To Be the First Black Governor of California

Nickolas Wildstar Seeking To Be the First Black Governor of California

Political activist and rap artist Nickolas Wildstar is running for governor as a candidate of the Libertarian party in the 2018 California Gubernatorial election. Were he to win he would be the first Black person to ever be elected as governor. 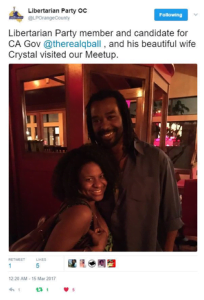 The 2018 California gubernatorial election will be held on November 6th, 2018, to elect the next Governor of California. Incumbent Democratic Governor Jerry Brown will be ineligible to run for re-election due to term limits. With California being a ‘top two’ state, every candidate must first successfully navigate through a primary election that will be held on June 5th, 2018.

Nickolas Wildstar is looking to fight the ever increasing tyrannical oppressive authoritative police state regime. From the Trespass Law to the FAA Reauthorization Act, The NDAA, The NDRP, FISA, SOPA and RFID chips, Wildstar believes all these are traps of slavery and is hoping he can help the people in California fight and conquer them.

Mr. Wildstar believes the citizens of California should be protected from greedy corporations and shiesty individuals, save money, stop spending and stop taxation. Wildstar is also after setting a foundation for California to becoming a resource based economy and experience true freedom.

In a statement at a by Nickolas Wildstar, at a campaign, he says; “My friends, the ever increasing tyrannical oppressive authoritative police state regime has come to its precipice. The Trespass Law, The FAA Reauthorization Act, The NDAA, The NDRP, FISA, SOPA, RFID chip. We’ve been given the choice to either conform to slavery or die! With the recent demand to disarm citizens this has become more evident than ever. We cannot afford to wait any longer for others to change things for us. We must mobilize politically and restructure from within the corruption that has engulfed us. Please join me in my campaign to govern the state of California. I’m seeking any and all participants to stand with me in reclaiming our liberty. This will be a grassroots effort that will take the participation of many therefore I implore you to spread this message. Do not pass up this opportunity to stand on the front lines of peace keeping. Do not wait any longer to experience freedom!” 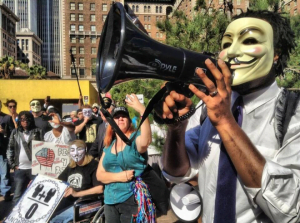 Mr. Wildstar is rallying for support and asking all residents of California to join in this quest for freedom. He continued, “I’m building a pyramid network of supporters to be the bricklayers of my campaign for governor of California so please pledge with me to take back our world. There may be times where I will need money, there’s going to be times where I will need your time, but most importantly I will need your voice. Once we are heard this world will become all that we ever dreamed and will NEVER be the same! Remember that unity is the unrivaled champion against division and it is this solidarity that is all we need to make right of all wrongs. Please make sure to tell friends living in California to rise to this challenge.”

You can join Wildstar in this quest for freedom. In case you have not heard him, he will be speaking at the Libertarian Party of California Convention on Friday April 28th, 2017 in Santa Clara alongside speakers like Overstock CEO Patrick Byrne and other candidates for governor such as transhumanist Zoltan Istvan.

For more information about Nickolas Wildstar visit https://governorwildstar.com/ or call (818) 538-4878