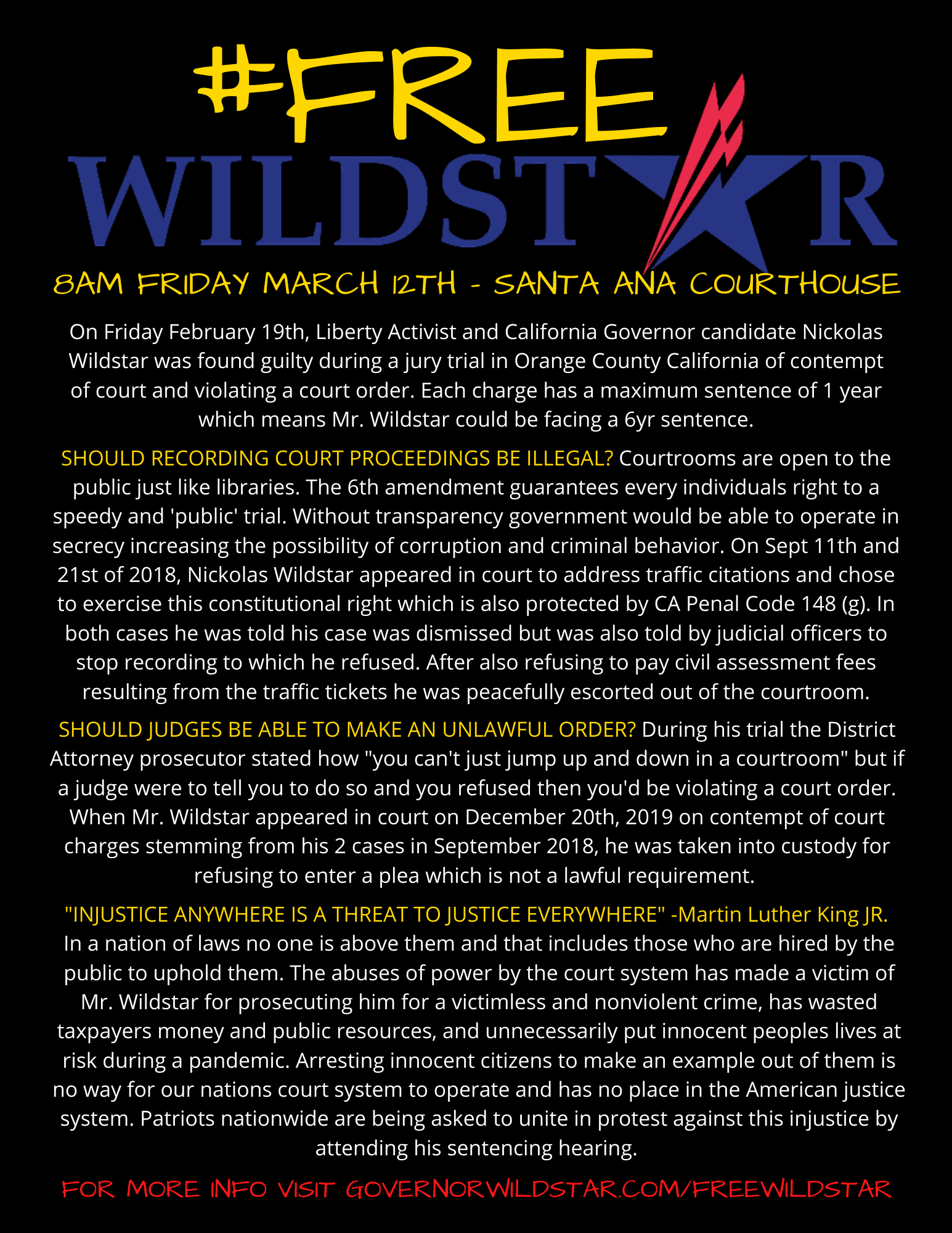 DONATION DETAILS Nickolas Wildstar plans to fight this battle all the way to the Supreme Court if need be to prove his dedication to the advancement of liberty 🗽 That journey will be long and costly but he’s willing to make that sacrifice for WeThePeople and to protect our rights! Anyone willing to support this stand for freedom, transparency, accountability and justice is encouraged to make a donation to cover costs for legal fees. Cut & Paste this link into your browser (https://www.gofundme.com/freewildstar) or click on this hyperlink to GO TO THE GOFUNDME PAGE.

WRITE THE JUDGE AND DISTRICT ATTORNEY Angela McCardle of the Libertarian Party of Los Angeles has laid out details on how anyone and everyone can put pressure on the judge! To get more details click on this link and join the NICK WILDSTAR LETTER WRITING CAMPAIGN. 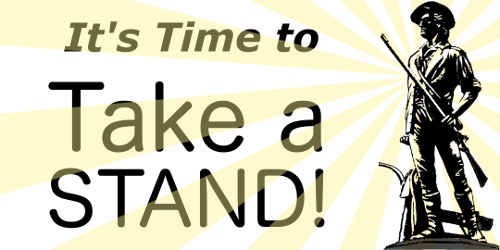 FREE WILDSTAR RALLY No one should have to spend time in jail for ‘crimes’ where there is no victim. Fact of the matter is there were no injuries that came from Wildstar’s actions other than a bruised ego of the law officials involved. As the trial date approached, the Orange County District Attorney’s prosecutor offered several plea deals starting first with offer of 1 year in jail plus 3 years of probation. This also included search and seizure of his person at any time including electrical devices like his cell phone, laptop, etc. He also would be required to provide a DNA sample and pay the $110 fee that is applied to process the sample. Wildstar refused. He was then offered 3 months in jail and probation with those same conditions; then finally before the jury’s decision, was offered 1 month with conditional probation. Wildstar again refused.

Now that the jury has found Wildstar guilty on all charges that give’s the District Attorney’s office no excuse to not take Draconian action and push for severe punishment. The Judge has the discretion to overturn the jury’s guilty verdict and send Wildstar on his way but when the case is about undermining the courts authority, one that is bent on power can be motivated to correct that image by appearing to be tough on crime. Both the District Attorney and the Judge claim to be acting to on behalf of WeThePeople yet if you ask any person on the streets of California their thoughts about this case they would say it’s a waste of time, taxpayers money, and resources that could go towards protecting them from violent criminals like murderers, rapists, and thieves.

That’s why liberty loving patriots far and wide are being asked to protest the sentencing of Nickolas Wildstar on Friday March 12th at 8AM outside of the Santa Ana Courthouse! Bring banners, posters, American flags, airhorns, and your passion for freedom to make a public outcry about this injustice. Wildstar will be there passing out pocket constitutions, information on jury nullification and reasons to urgently create a common law grand jury. Typical rally etiquette is expected from everyone in attendance which means peacefully assembling in a respectful and non-threatening manner so no weapons or provocations of violence will be tolerated. We must protect ourselves and others by providing a safe environment where all feel welcome to participate. Below are protest chants that you are welcome to rehearse or use a message for your sign! CLICK HERE TO JOIN THE EVENT ON FACEBOOK AND WATCH THE LIVE BROADCAST. 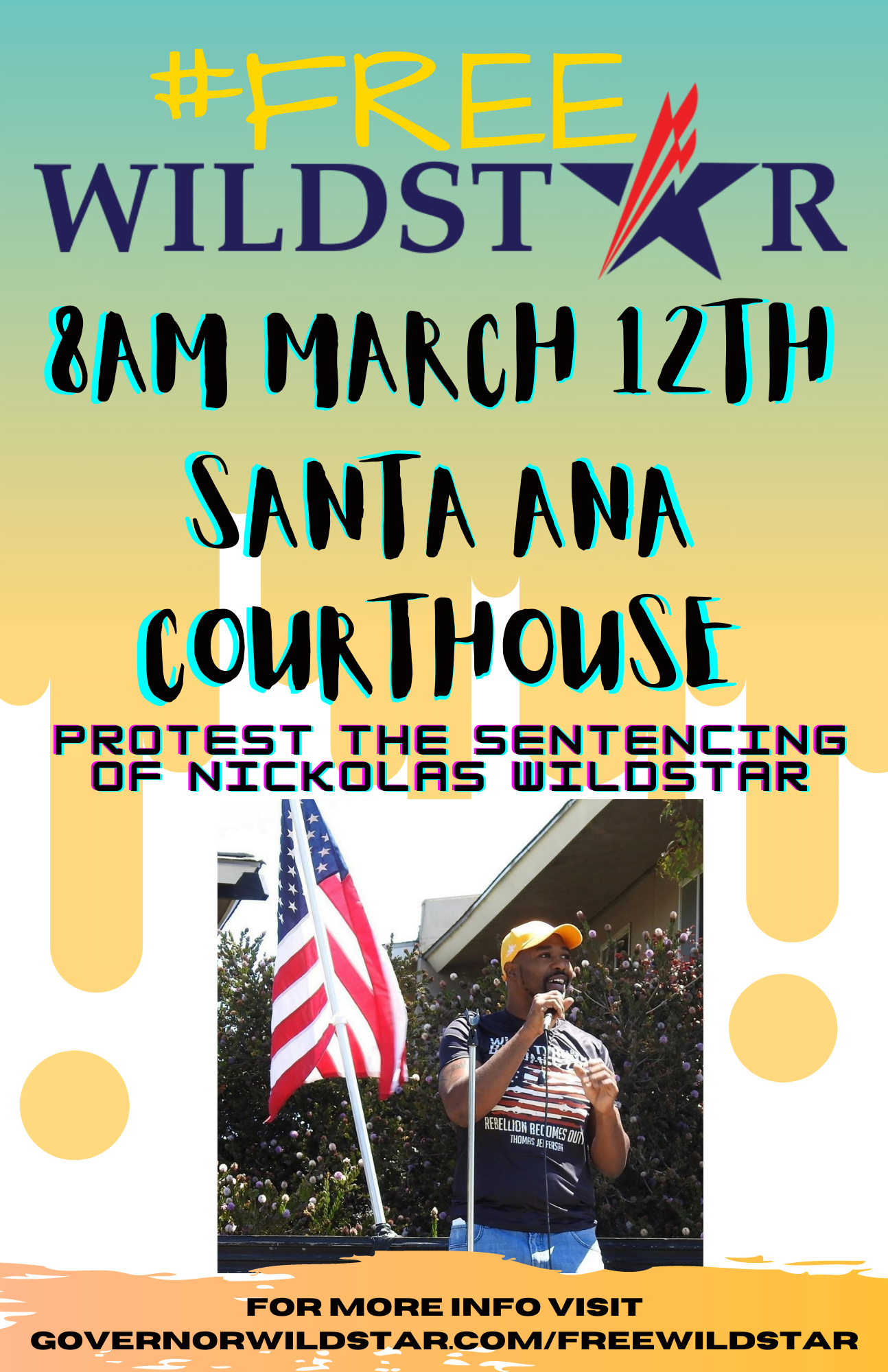 Court Appearance 1 – September 11th, 2018: Nickolas Wildstar appeared at the Central Justice Center in Santa Ana, CA regarding traffic citations which were dismissed by the commissioner as stated in the video although he was still being demanded to pay a fine for the dropped charges. Officers then escorted Wildstar out of the court building after refusing to stop recording.

Court Appearance 2 – September 21st, 2018: Nickolas Wildstar appeared at the North Justice Center in Fullerton, CA regarding traffic citations which were again dismissed and was  demanded again to pay a fine for the dropped charges. The unnamed judicial official, along with a sheriff’s deputy, accosted Wildstar for filming proceedings who then charged the judicial officer with treason. He then requested assistance from the deputy to perform a citizens arrest of the justice officer which was denied by the deputy so Wildstar then asked for 2 witnesses of the crime from the audience to assist him with the arrest. Wildstar was then escorted out of the court building for continuing to record against the court wishes.

Arrest in Santa Cruz – November 22nd, 2019: Nearly a year after his September 2018 appearances in court, Nickolas Wildstar was returning from an event in Santa Cruz and was stopped by California Highway Patrol. Officers discovered that Wildstar had warrants for contempt of court that he was unaware of and arrested him and took him away from his family.

Court Appearance 3 – December 20th, 2019: Nickolas Wildstar appeared in court to dispute the contempt of court charges from the September 2018 traffic cases. The sitting judge attempted to have Wildstar incriminate himself by entering a plea which is not a legal requirement. He was then taken into custody by sheriffs at the judge’s command for contempt of court. Having missed celebrating Christmas with his wife and newborn son, Wildstar gave in to paying bail after spending 8 days in jail. The video seen is a secret recording captured by Wildstar using spy glasses.

#FREEWILDSTAR – Call To Action: In this livestream Nickolas Wildstar discusses the results from his trial and takes questions from viewers as well as reveal his plan of action to combat the criminal justice system.

Wildstar Sentenced for Contempt of Court